In 2013, the City of San Diego added the Street Preservation Ordinance (SPO) to the San Diego Municipal Code. The City’s Transportation and Stormwater Department (TSW) manages the policies and procedures to minimize damage to public infrastructure and to recover costs to the City resulting from excavations in the public right-of-way (ROW). The SPO requires that utilities coordinate their infrastructure projects and sets excavation moratoriums where pavement work has been done. From 2001 to 2017, TSW relied on a custom Interactive Mapping Coordination Action Tool (IMCAT) to coordinate projects in the ROW.

In September 2015, the City began a migration to the Accela Civic Platform and the Accela ROW Management Module was selected as the replacement for IMCAT.  Quartic Solutions was brought in to lead the creation, integration, and management of GIS data and processes into the new system. We also created a public-facing custom Web App in ArcGIS Online.

GIS was Integrated with the Accela ROW Management Module

Quartic developed a series of scripts to feed the Accela API with data from the City’s Enterprise GIS and Primavera CIP management system.  Through this development effort, Quartic worked with the City to identify authoritative sources for the data and to enforce standards for maintenance and content. 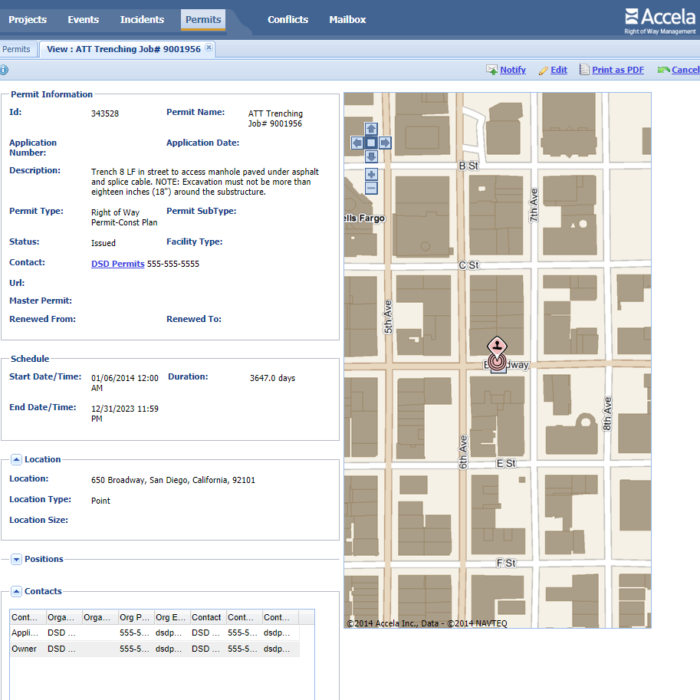 An ArcGIS Online Web App was created for Use by Citizens

The Project Finder Web App uses much of the same data as the Accela ROW Management module.  Python scripts were created to access the source data and refresh the map services every 2 weeks.  The app allows a citizen to see City CIP projects, permits, special events, and moratorium locations.  Searches can be done by address and filtered by project type. Project details and contact information are easily viewed by clicking on the map.

CURIOUS ABOUT WHAT WE CAN DO?